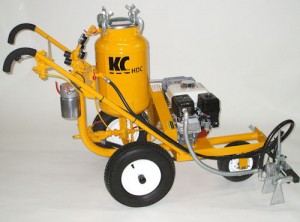 Kelly Creswell has been manufacturing striping machines since 1937 and are one of the most recognized names in the line striping business. They are one of the few manufacturers who manufacture both air atomized and airless machines.  Their machines are built very rugged and simple  and are difficult to wear out which is why you see so many still in use.  Much Like the Graco, Airlessco and Titan Line Stripers, the Kelly Creswell Stripers are easy to operate and maintain and provide you with professional quality lines from day one. Air Atomized stripers are different from airless ones in that they mix air with the paint much like an automobile paint spray gun. This makes the machine and spray pattern more forgiving but also makes the line a little less sharp than an airless line.

Probably the most rugged of all stripers, Kelly Creswell machines weigh in at upwards of 250 pounds. Their stripers are not light but will last you a lifetime. As previously mentioned they make air atomized and airless models and also carry push and self propelled models. The airless machines draw from your 5 gallon bucket and spray a line directly on the ground via a spray gun.  The air atomized machines use a 7 gallon pressure tank that utilizes air pressure to force paint out of the tank and mixes it with air.  The air paint mix then sprays out of a gun onto the ground.

Machine pricing as well as technical information can be obtained by calling the Kelly-Creswell Company, Inc. at (800) 372-9221

The Kelly Creswell parking lot striper has a very popular choice among professional stripers since 1937 and will no doubt continue to be popular well into the future.

Getting Started in the Parking Lot Striping / Sealcoating Business